To office or not to office?

That's often the question when working on a jobsite, either in town or at a remote location. Of course, materials can be delivered as needed and stored in a fenced-in area. They'll still be exposed to the wind and rain and snow and hail. But for some materials, that's not much of an issue. (Unless it freezes, and they get stuck together). 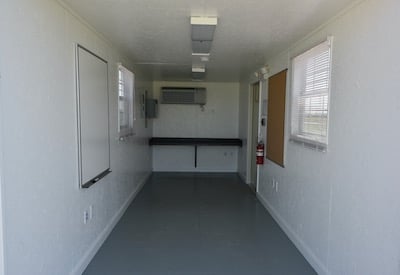 If your stuff doesn't weather the storm well, or might "accidentally" walk off the job, you should definitely consider an onsite storage container. But …

A mobile office, on the other hand, is a whole other ball of wax.

Sure, you could operate a portable office from the cab of your pickup or the passenger seat of your car. You could even set up a card table and chairs in the bed of your rig (don't laugh - I've seen it done).

The aforementioned wind, rain, snow, and hail can wreak havoc on your vehicle's mini mobile office. And the fuel you'll expend staying warm in the winter and cool in the summer?

Then there's the software needed. I have an entire office software productivity suite on my phone. Writing documents, working spreadsheet, and viewing schematics and drawings on that little device is possible. However, it's a real pain.

For the now-nearly mandatory Internet connection, your smartphone could be your onramp to all things online.

A buddy of mine connected his laptop to his smartphone's hotspot and clicked away happily in the cab of his truck. It worked until his coffee slid off the dashboard and onto his computer.

Let's just say he was less than pleased.

Seriously, though, if you're on the fence about whether you need a mobile office for your jobsite, let's look at some benefits and advantages from the online operations point of view.

The first order of business is to get the Internet inside. Honestly, your choices may be limited by what's available. For instance, if you're in a remote location, your only option may be satellite internet. But fortunately, the technology as improved somewhat, and better upload and download speeds are more possible than they were in the "early days."

In fact, the connection rivals that of another option, Digital Subscriber Line or DSL. But in most locations, you might find cable company Internet providers, or for the crème de la crème, fiber optic.

Of course, if satellite is the only game in, or actually, out of town, you'll need a dish antenna receiver as the first bit of hardware.

Other options usually require some type of connection box outside the mobile office, normally provided by your Internet Service Provider (ISP).

Once inside, it's up to you (although SiteBox Storage might be able to source some of the equipment and furnishings). You'll need a modem to "translate" the signal to a "language" your computers and devices understand.

Many modems have one or more ethernet ports to hook the cabling up that runs to your devices. However, you might want a router installed after the modem to handle that chore. Many routers also have wireless or Wi-Fi capability for your mobile office devices to connect to the Internet.

Switches can also be installed, which add ports for additional connections. In fact, if you intend to run the same Internet connection to several mobile office modules, installing a switch in those may be the only connection hardware you'll need.

Assuming you have the layout or configuration of your office defined, it's time to get the ethernet cabling to each of your devices. If you're not familiar with network cabling, here's a tip. It's not like a phone line that can be daisy-chained to every device. You'll need a separate cable to each computer or network-enabled device.

Fortunately, you can run several cables in a conduit to keep things neat and tidy. Word of caution, though. It's not a good idea to run network ethernet cables and power conductors in the same conduit. Keep them separated in different conduit runs.

That said, it's a good idea to run both the power outlets and ethernet jacks to each desk, worktable, or bench. If your devices are handy to both power and network, it keeps extension cords to a minimum.

By the way, make sure you have power and network drops run over to your printer. As most printers are network-enabled, you won't need the computers connected directly to a printer. One printer can service many devices.

But why would you want all this networking installed? You could go totally wireless, right?

First of all, a hardwired network is faster. Your top connection speed is determined by the service you're able to start with. But a wireless connection can be significantly slower. And each device may slow it down even more. It may not make a huge difference for email and Internet browsing.

But for uploading/downloading large files, or when video conferencing is necessary, a wired network provides the bandwidth you'll need for those activities.

Secondly, a hardwired network is more reliable. If you've ever stumbled around with your phone in the air, searching for more "bars," you know exactly what I mean. With the possible exception of a satellite provider, your hardwired network shouldn't be susceptible to the whims of sunspots or Mother Nature's tantrums.

Sure, a smartphone can be used as a hotspot for your laptop. And security programs exist for smartphones, too. But many people don't use them properly or consistently. Wired networks are much safer from the get-go.

One final benefit of a hardwired network

I don't know how long you'll need a mobile office. It could be a week or two - it could be months. If the timeframe is fairly long, a hardwired network for your mobile office has another advantage.

In fact, it's an option many brick and mortar offices are moving toward: VoIP (Voice over Internet Protocol) phones. Sometimes called Internet phones, these operate over your network, not a dedicated, additional phone line.

One difference is notable. I mentioned that each device needed a separate ethernet cable run to it. It's different with the VoIP phone. The phone is connected to the router by the cable. Then the accompanying computer, if needed, is patched into the phone with a short cable. The phone itself splits the single line into one signal for the phone and another for the computer.

This brings one more convenience of the standard office to the office you need to work effectively and efficiently.

Need to outfit your mobile office with network capability? Give our reps a call today … they're ready to help you get it done right.

By now most business owners have at least heard of portable offices. Companies in the construction,...

6 Tips for Securing Your Portable or Mobile Office

There are a lot of "moving parts" to any company. Along with daily operations, office security is...

Several years ago, we decided to remodel our carport/utility room, turning it into a multi-use...
Get a Quote